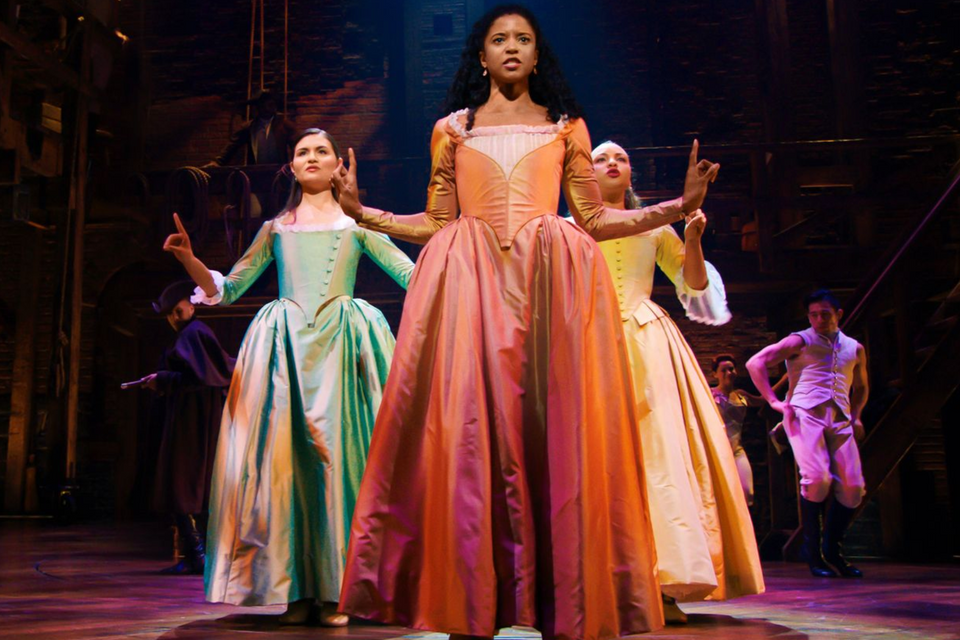 In his strikingly grand musical, Hamilton, Lin-Manuel Miranda uses the Schuyler sisters to emphasize the meager but underrated power and influence that women held in the early, foundational years of America.

The few female characters in Hamilton—Angelica, Eliza, and Peggy Schuyler—appear focused on the male characters and finding husbands to carry on their legacy and provide them with status and wealth, specifically the eldest sister Angelica, "I'm a girl in a world in which my only job is to marry rich." Interestingly, the entire number "Helpless", in which the Schuyler sisters are presented as naïve, helpless beings, contrasts the fact that they were quite informed, wise women on a social level.

Each sister is starkly different, beginning with Angelica as the figurehead: a complex, non-helpless character. Angelica serves as this atypical, self-aware, and self-declared leader when she says, “’We hold these truths to be self-evident / That all men are created equal.’ / And when I meet Thomas Jefferson, / I’m ‘a compel him to include women in the / sequel!” Angelica is the wisest of the three, the powerful eldest archetype with a hint of righteous bitterness.

Is this wisdom and bitterness why Miranda made Angelica single for most of the musical? Was the independent woman not marriage material? Why did Hamilton marry Eliza when he really loved Angelica?

While Angelica is the foundation of the strength within the Schuyler sisters, if it had not been for her middle sister Eliza, there would be no Alexander Hamilton. In spite of the musical using “helpless” as a motif to constantly describe Eliza, she proves herself anything but helpless in the wake of her husband’s death and throughout the rough patches in their relationship.

Eliza was never actually helpless in the first place.

Eliza always had a safety net whether it be her husband, her older sister Angelica, or family money and education. Her character existed in this high-status situation in which she would always be well-off and socially accepted.

I think in sum, Miranda created “Helpless” to demonstrate:

The true helpless sister was Peggy—trapped in the immense shoes and shadows of her older, dramatic, successful sisters, Peggy might be the least highlighted character of the entire musical. In actuality, Peggy in real history was as independent and as Angelica-- taking on the role of a true Schuyler. As she was held in high regard for her wit and intelligent husband, Peggy was not the pitiful background character she is presented as in Hamilton.

Within the musical, the women hold significant amounts of influence over their male counterparts. For example, the stability of Hamilton is dependent on the condition of his and Eliza’s relationship-- when Hamilton is off or upset, the whole colony is disrupted.

Miranda created Eliza to be the "rock," motherly, and supportive but Alexander Hamilton strips Eliza of that right and love when he is-- arguably --responsible for their son's death when he encourages his son to duel. Eliza grounds Hamilton in times of profound stress and sadness, “Look around at how lucky we are to be alive right now,” yet she meets calamity.

Following Eliza’s endless love and support for her husband, she is met with betrayal from Hamilton’s affair with Maria Reynolds. Maria Reynolds is the only other highlighted female character in the musical. Merely looking at the physical characteristics, Reynolds wears an all-red dress representing symbols of temptation, sex, and the devil.

This practice of outwardly demonizing Reynolds as this “femme fatale” is a sad way to investigate the nature of America’s first sex scandal but gives insight into the influence she held over one of America’s most notorious founders. Maria Reynolds is not celebrated, but given the blame for existing as the evil temptress in Hamilton’s life... but an affair is a double-sided entity. Alexander Hamilton’s actions are overlooked and excused in the long run as he remains a part of government and never loses the gift that is Eliza’s love.

With respect to education, Alexander Hamilton talks about “getting a scholarship from King's College,” -- implying that education is much of an indicator of high status and intellect throughout Hamilton. Through a feminist lens, it makes sense that men were the only ones who had access to education and college as viable options because they were entrepreneurs and founders of the nation...because of their options and capabilities that excluded the rest of America’s population. Education is an unspoken indicator of one's worth and potential, especially in the historical context of Hamilton, because a college education was unique and scarce. Had the sisters been following the same path, we might have seen a smoother series of events in America’s journey to independence.

Miranda highlights the endless dissatisfaction and disappointment the women faced with the death of Eliza’s son which was eventually followed by the death of her husband, Alexander Hamilton, then four months later-- her father. Her mission in life was not education but it was solely marriage and family. That was literally the only option and she could not even have that.  The profound pain that Eliza experiences allows her to put that passion for a family into something else when she creates an orphanage in honor of her late husband and son.

With the last words, “Who lives, who dies, who tells your story,” Eliza preserves the legacy of Alexander Hamilton despite his faults in the relationship.

Ideas of sisterhood and womanhood in this musical are slim and meager, but prevalent. The connection and bond between Angelica and Eliza is hard to miss and just might be the truest form of love presented in the musical. Back to the notion of helplessness,

Is Eliza actually helpless? No.

With the final number of the musical in the hands of Eliza, Miranda makes it clear that this transfer of power is put into the hands of a woman. Eliza could never be helpless with the support of her sister Angelica, “From your sister/Who is always by your side.”

The Schuyler sisters, overall, represent the unseen hands that helped orchestrate the beauty and complexity within Hamilton and the foundation of America as they influenced the well-being of Alexander Hamilton and arrived in time for support and guidance.