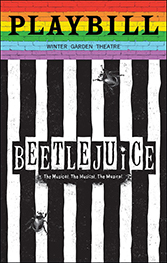 Beetlejuice is weird. There’s no getting around that. It's a story about a fourth-wall-breaking demon who's trying to get a goth teenage girl to undermine her father’s business with the help of two ghosts that are haunting her new house.

There are many reviews of this musical floating around the internet; many of which imply that the show was an absolute flop. But many readers don't understand these reviews were written about the first version of the musical. Since then, it's been reworked into the masterpiece it is today. Those who saw it before the official Broadway opening might want to take a second look.

The music lends itself to the weirdness of the story and flourishes under it. With music and lyrics by Eddie Perfect, the Beetlejuice's sound encapsulates the whimsical yet unbelievable strangeness of the story.

Take the first songs for example, “Invisible” and “The Whole Being Dead Thing.” The first is Lydia’s somber ballad about her mother’s death, but the second is a humorous upbeat song that makes fun of the morbidness in the show with lines like "Welcome to a show about death!" scattered in the lyrics. The opening numbers firmly establish the mood for the rest of the show: morbid, but hilarious.

Beetlejuice, played by the talented Alex Brightman, is chaotic, fun, and turns away from the dark roots of the original film. Those who were fans of the original 1988 Beetlejuice film may have reservations about the musical because of the production’s much more light-hearted and comedic take on the classic horror story. However, those who know and enjoy the animated series about a kid friendly Beetlejuice may feel many similarities between the musical and the cartoon.

Either way, those critics screamed in anger at how the musical fails to follow the original Tim Burton film. Or how the show didn't seem to take itself itself seriously enough for their taste. They complain that it "lacks Keaton’s sly, unwashed trucker charm."

But one large factor has flown over the heads of these reviewers: the show isn't targeted for the middle-aged businessmen who are devoted fans of the 1988 film. The humor, writing, song style and character design are all targeted towards a younger generation. From the dark jokes about death to the over-the-top goth look that Lydia sports, it's humor is targeted for teens and young adults.

In addition, the show owes more to the animated series rather than the movie, where Beetlejuice is more eccentric, rather than creepy. For teens, the true audience, the show is a riot: quirky, fun, and perfectly morbid.

Welcome to a show about death! You're...you're gonna be fine.

Take “Say My Name,” my personal favorite, for example. The beat of the song is very strong, making it very catchy. The main character, Lydia (played by Sophia Anne Caruso) has to make up her mind about whether to accept help from Beetlejuice or not. The lyrics are hilarious as we follow Lydia and Beetlejuice's conversation, eliciting laughs each time Lydia teases saying Beetlejuice's name the required three times in a row. The characters even play charades at one point in the song! The tune also develops the characters' relationship as the demon himself Lydia from jumping off the roof.

The show was first performed at the Winter Garden Theatre on April 25, 2019, but due to COVID-19, the last show was on March 11, 2020. The set construction by David Korins is outstanding. The musical definitely doesn't fall short in the visual department. From the bold lighting to the wacky furniture, the visuals match perfectly with the crazy story. The design earned the crew the Drama Desk Award for Outstanding Set Design for a Musical and the Outer Critics Award for Outstanding Set Design.

Costume design by William Ivey Long also doesn't disappoint. Each character's outfits highlight their personality and helps bring the musical to life. The musical was also nominated for many awards in this department as well.

If its multitude of nominations and awards don't prove that the show rocks, maybe the popularity and internet hype might. There's been animatics created based on the songs of the musical, as well as multitudes of parodies and covers, all by the younger audience.

How do we hold our neighbors accountable? What is the role of the police?
Will West
4 min read
If moms want to understand their teenage daughters better, they really should try reading the words that we consume.