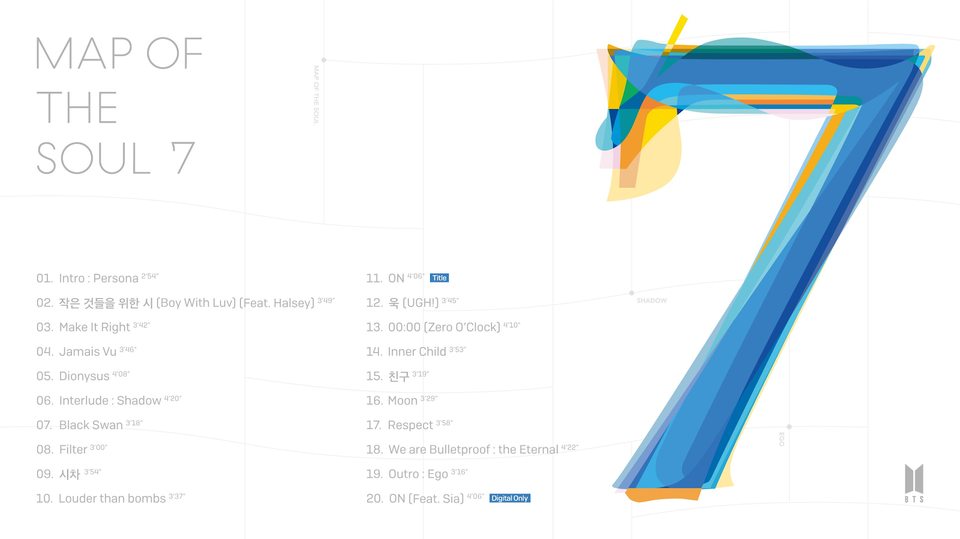 BTS is taking a new approach, applying psychology as an organizing principle for their new album:  Map of the Soul: 7.

The new album, released on February 21, 2020, has been a big hit, and the K-POP stars are just reaching the peak of their music career. All twenty songs on the album have already hit the billboard charts; even the ones that had already been released on their previous album: Map of the Soul: Persona (2019). The album title represents the seven members of the boy band as well as the seven years they have been performing together. During that time, they have collaborated with distinguished American singers/songwriters, such as The Chainsmokers, Niki Minaj, Halsey and more.

A Focus on Jungian Psychology

BTS often gathers inspiration from books and movies, as well as their daily lives. The new album brings different types of music together: Hip Hop, Pop, Electronic, and R&B, to name a few. What binds these songs together, however, is the way they flow through Jungian Psychology, a branch of psychology that delves into personality and the human psyche, dividing it into three pillars:

Each song tells the personal story of the singers and how they have felt as they rose to fame. The music and lyrics dwell on strength and determination as they depict the singers' journeys and the obstacles they have overcome.

"Intro: Persona" kicks off the Persona portion of the album. For Jung, the persona represents the version of ourselves that we show to the public.

The song talks about the different masks, or personas, that the artist puts on to please the people around his life. Ultimately, the singer battles himself because these masks, these personas, have covered up his true self. As he previously delved into this thought process in the song “Airplane pt.2” in 2018, when they sang: “Who should I live as today, Kim Namjoon or RM?” The singer struggles to reconcile his true self with his public persona.

The song "Black Swan," is part of the Shadow portion of the album, which showcases the innermost, darkest thoughts and feelings that we deny.

This first part of the song shows the artist's dark thoughts, confessing the fear of losing his passion for music. The "first death" symbolizes an inability to do what you were once passionate about: singing, dancing, or playing a sport.

Slowly, I open my eyes
I'm in my workroom, it's my studio
The waves go darkly by in a throe
But I'll never get dragged away again
Inside
I saw myself, myself

This second part of the song expresses how the artist has overcome his fears and rediscovered his passion for music. The shadow is the part of oneself that remains hidden from the world, the deepest secret of a person. In the music video for the previous track, “Interlude: Shadow,” BTS further showcases their struggles with fame. How his shadow, or his darker thoughts, has gotten a hold of him as he regrets his desire to become a well-known artist.

The song "ON," is part of the Ego portion of the album, which embodies who you perceive yourself to be.

Even if I fall, I come right up, scream
That's how we've always been
Even if my knees drop to the ground
As long as they don't get buried
It won't matter
Win no matter what

This part of the song shows how the artist perceives himself as a strong person that never gives up. Furthermore, by ending with ego, BTS finalizes the album's story, emphasizing pride as they showcase the true self, unburdened by what others think, a theme taken up in the album's final track: “Outro: Ego.”

BTS's Map of the Soul: 7 not only highlights what the boyband has gone through in their life, but also gives their listeners and their fans a way of connecting with them through the songs. Fans can journey along with BTS as they seek to understand and accept themselves.

In addition to digging into their Jungian personas, BTS continues to break records and achieve new milestones. Their latest single "Dynamite" hit #1 in the Billboard's Hot 100, increasing their exposure. This was followed by two other #1 singles, "Savage Love" with Jason Derulo and "Life Goes On." As a result, BTS has been nominated for a Grammy in the Best Pop/Duo category for their song "Dynamite."

Family is something that is very important to me, and I love being around my friends.