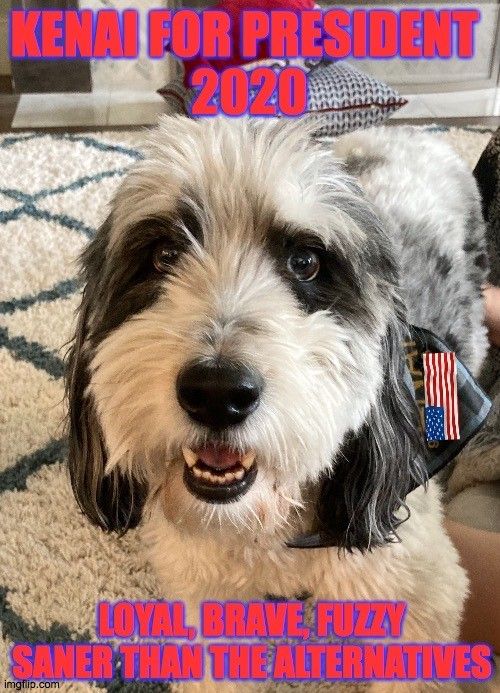 On Tuesday night, we as a nation, cried. We became united in our lost hope in the human presidential candidates. After the "dumpster fire within a train wreck" of a debate, I decided that if I could vote, I would vote for the late-comer, new presidential candidate, Kenai Bear NoJo. Although she is a dog, I know that she is the right choice for America.

Unlike her opponents, Kenai has clearly defined her positions on current issues. She has refrained from lying, backtracking, spreading misinformation, and misdirecting. She answers any questions about her stance on political issues head-on and does not hide behind ad hominem attacks and raised voices.

Kenai has pledged that when she joins upcoming debates, she will act with decorum, follow agreed-upon rules, and respect the moderator and other candidates.

In spite of what Tuesday's disaster would have us believe, policies are very important to an election. There are more important issues than one-upping your rival or yelling that things are "simply not true" and "fake news." Though, our two human presidential candidates would beg to disagree.

Kenai takes a moderate stance on many issues including violent vs. peaceful protest, the COVID-19 pandemic, climate change, and racism.

Kenai believes that all violent actions should be condemned. To demonstrate her nonviolent beliefs, Kenai passed the Canine Good Citizens test and therapy dog training course. She is proud to be a good citizen. Kenai knows that biting, scratching, and aggressive barking is not acceptable. Unfortunately, the other candidates struggle with that last one: they would quickly fail the good citizens' test.

Kenai understands that violent protests cause harm by causing strife and derision. Kenai is a proponent of peaceful protest. Peaceful marches and demonstrations are excellent ways to express a need for social change. If elected, Kenai will work toward a unified nation: violence will only destroy our ability to make that happen.

The COVID-19 pandemic that has decimated the country is one of Kenai's major concerns. However, she knows that politicizing a pandemic is quite stupid (it is a viral pandemic, and it is happening, and we all agree that dying is bad, so can we just get along for once!). So, Kenai has decided to depoliticize the issue by focusing on an aspect of the pandemic we can all agree on: dogs.

Dogs love you and want to be with you ALL THE TIME. Dogs are infinitely happier when you are home. Kenai will reinforce stay-at-home safety precautions because she wishes to boost morale in this dark time. Dogs provide much-needed love and comfort. Also, since dogs can contract and die from COVID-19, you want to protect your dogs and Kenai does too.

Kenai recognizes the numerous negative effects of climate change and will correct them through meaningful policy change. She reminds others to keep green spaces clean by barking at bits of trash and chasing after stray plastic bags. Her green plan, which is guided by experts, includes:

Kenai's opponents spend too much time talking in circles about climate change and trying to redirect focus to easier topics.

Kenai, ever the portrait of grace and humility, knows her plan can be improved on and does not have an over-inflated ego keeping her from collaborating with others on important issues.

Finally, Kenai knows that systemic racism is an important issue in the United States. Kenai loves everyone and wants treats and cuddles from everyone, no matter their race. She is always excited to meet people (except old, white men, she seems to have a problem with them, I wonder why?) and learn new things.

Kenai will fight against racism in all of its forms. She believes that all people (and dogs) are inherently equal and deserve equal treatment under the law. Kenai's opponents are wishy-washy on the issue of race. They are afraid to say anything controversial because they do not want to lose votes.

Kenai is not a coward. This future president will stand up for you just as fiercely as she protects her family. Kenai loves you, and so should everyone else.

Kenai has not yet announced a running mate, but she has pledged that her vice-president will be a human.

To learn more about Kenai's positions on other important issues—the economy, the Supreme Court, voting by mail, etc.—please visit her campaign website.

Unlike her millionaire and billionaire opponents—one of whom does not pay taxes—Kenai is not a cash-hungry hound. She will not accept monetary donations out of respect for the financial stress that many people are experiencing due to the pandemic. However, Kenai will always accept treats, ice cubes, and cuddles.

Vote Kenai for president in 2020! She is the future of the United States of America!